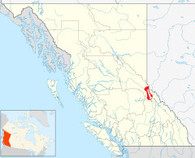 In September 2011, we visited Canada and the Blue River Safari was one of two organised bear viewing experiences that we did during that trip.

I had read about the ‘Safari’ in a holiday brochure and decided to Google it and found the following website:www.riversafari.com

Located close to the ‘town’ of Blue River accessed from the Yellow Head Highway 5; it is located approximately halfway between Jasper and Kamloops and halfway between Mt Robson and Wells Grey Park. We stayed a few nights in Blue River; however the River Safari could easily be done on the way through whilst travelling elsewhere.

The safari operates on the North Thompson River and Mud Lake, and you go out by jet boat, to see bears, birds and whatever wildlife happens to be standing on the side of the water.

If your group is less than 8, there is no need to make a reservation. Safaris depart every 30 minutes and they operate from 9am to 4pm from May 15th to October 1st.

When we arrived they were fixing one of the boats so we had to wait approximately an hour. The site has a floating café where you can buy food and drinks and makes a pleasant rest stop even if you’re not going out on the safari!

Once the boat was fixed, we were fitted out with weather proof coats (it was a lovely sunny day, but the weather can change suddenly and the boat does travel fast which causes a bit of a wind rush!) Our boat was full, but due to very clever seating arrangements we all had good viewing positions. The arrangements were as follow, we were all asked to stand with our partners and then told where to sit according to our heights, I’m not sure what happens if a very short person has a very tall partner… but as Alan and I are somewhat ‘petite’ we got to sit at the front of the boat. There were six couples on our boat and we were from six different European nations!

We jetted off along the river to Mud Lake (which was not muddy, it was a beautiful clear blue). It wasn’t long before we spotted our first bear, a dark brown Black Bear. She stood on the rocks for a few pictures and then slowly moved into the wood. 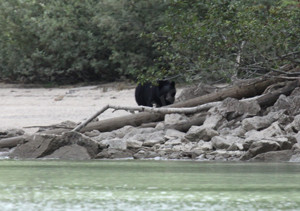 We saw another black bear in the distance but it went into the wood before we could get close enough for video and pictures. We then spotted a black bear snorkelling and we watched him for quite a while, giving us plenty of time to take lots of photos and video.

Our final bear was a young female bear that had been pushed away from her mother for the start of the breeding season. We were told that when she was born she was completely blonde and had been the subject of a lot of interest by National Geographic. Her colouring was changing but she still had a blonde streak across the top of her back.

As we were watching her a juvenile bold eagle swopped down and took a fish right next to our boat! We followed it to the tree it had chosen to eat it’s well deserved meal.  Finally, we were taken to see a waterfall and then returned to the dock again.

Amazingly all this viewing was in a one hour period! It was well worth the money and if we visit the region again we would take a detour to do it again.