This is day four of our trip but day one of the Great Ice Bear Adventure, so welcome to another day 1!

Our group of six followed the instructions to go up to the 6th floor of the Grand Hotel and were welcomed by Doreen and given a choice of drinks (soft and alcohol). After a brief chat, while we waited for the remaining eight guests to arrive, we all sat before a projector screen for a short presentation on what to expect over the next few days, timings for tomorrow and a discussion about the suitability of our clothing for the cold weather.

We then had a buffet dinner in the same room, sat at two large round tables, the six of us on one table and the eight on the other. There should have been another two guests but they had to cancel last minute, our total group size would be 14.

Those that wanted to hire cold weather gear made their arrangements for its collection so they could take it with them on the next day’s flight. After looking at the forecast, we decided our gear would be fine, however, had we been part of the party that we met at breakfast that morning or that we swapped with the next day, I think I probably would have made a different decision. So do check the forecasts and speak to Churchill Wild, it will make you miserable if you are too cold.

Introductions and dinner over, we all went for an early night as we had an early start the next day.

First job this morning, after showering and getting dressed, was to drop the bags we were leaving behind off at reception so they could be stored until our return.

We then went for a quick buffet breakfast in the hotel (included in the GIB package cost) before a quick return to the room to get our gear. We all met in the hotel lobby and took the short walk over to airport check-in together. My luggage planning had paid off perfectly and both our hand luggage and checked luggage were well within the allowances.

It was a lovely clear night, so no fog to delay our flight to Churchill and we took off on time and watched the sunrise as we flew over the tundra towards Churchill. Once we landed we had enough time to stick on a few more layers and then we were on the first of two flights out to Dymond Lake Lodge.

We didn’t spot any bears out the window of the plane but as we came into land our pilot told us a bear was on the runway and ran off as we landed. We climbed out of the plane and were welcomed by Nolan (the Director of Lodge Operations) and Terry & Josh our two guides. As we were saying our hellos the runaway runway bear made a reappearance and we had our first polar bear sighting within two minutes of arriving!

As new guests arrive (us) the previous guests leave, you get to say a brief hi to those that are leaving on the first flight and then we got to spend a bit longer with the other half of the ‘old’ group while the plane returned to Churchill to collect the other half of our group.

As we walked the 5 minutes from the runway to the lodge we saw at least another three bears, all at a decent distance. Our rooms weren’t quite ready for us so our bags were transferred to the corridor of the lodge building we were to sleep & rest in and explored the lodge compound (fenced area).

Dymond Lake Lodge is made up of three main lodge buildings, the middle building is the dining room and parallel on each side are the two accommodation buildings. Both have cosy lounge areas and both have features that make them equally desirable to stay in. Ours had fantastic views over the lake from our lounge and our bedroom windows. The other accommodation building had a high level deck area that could be reached via walking through the lounge.

The bedrooms themselves were nicely furnished and the beds were comfortable. They had either two singles or rooms with a double bed. We opted for two singles to help get a better night’s sleep ;).

Each room had its own private shower room (which always had hot water!) and a hairdryer, which is quite important for me as I like to wash my hair every morning when I shower and I didn’t want to go outside in the cold and end up with icicle hair!

The dining room was set out to encourage people to sit together and they usually have a policy of guests rotating tables. However, as a party of six that had especially booked together to spend time together (and not having all been together for three years) we insisted we sit together. A nice compromise was reached with the tables being brought together into two long tables so we could sit together and with the other guests & guides.

The meals were outstanding! I have a milk allergy and they ensured I had slightly modified versions of things I couldn’t eat. Each meal was beautifully presented with ample quantities for those that wanted seconds. Cooked breakfasts, soups, tasty salads, freshly baked bread and sweet treats, we certainly never went hungry!

Back to the bears… it wasn’t long after we had quickly explored the lodge that we had a female polar bear right outside the window of our lounge and then in front of the dining room. And this was all before the other half of our group had arrived.

Our group of six congratulated ourselves on deciding to have our polar bear adventure here and this lovely bear had already made the trip worthwhile! She did the decent thing and she stuck around for the other half of our group. As we sat down to our first delicious lunch the bear continued to snuffle in the snow for berries outside the dining room window. Never did I think that only after a couple of hours of being at the lodge I would be so relaxed about not thinking I had to be outside with a camera!

At 2pm it was time to go for a walk outside the lodge compound. With all the excitement of watching our female bear I hadn’t yet unpacked our gear, so I decided to stay behind while the rest of the group went out for a walk towards the Hudson Bay coast. Nolan commented to me that I was brave to stay behind, wasn’t I worried I was going to miss something. I pointed to the bear by the fence and said, I wasn’t ready to go out and I have my own bear here :)

It actually turned out to be a really good decision. While they walked out to the coast I unpacked. I then went out to the compound to see whether there were any more bears in sight and it turns out there were several! I strolled up to the upper deck to see what the group were looking at and then spotted another bear walking across the ice on the lake. I chatted with Nolan who gave me some safety advice about fence safety and to step back at least three feet (1m) from the fence if one approached. It wasn’t long before I was putting that advice into practice as a male bear decided to come over to say hello to me. I was all alone (or so I thought, Nolan was actually watching me) and I slowly moved back from the fence as the bear walked towards me. I sat on the deck as it came closer and closer until its nose was touching the fence. Its then you realise quite how big they are! It was a thrilling experience to be the one in the cage, this magnificent wild animal was coming to the human zoo to view me. He huffed at me and made a hiss noise and strolled off. Nolan knocked on the window behind me and gave be a big thumbs up and I had a massive smile on my face!

Apparently the bears in the proximity of the lodge had heard a petite human with violet hair was on show in the human cage and several more came to see me. In fact I was having better viewing here at the lodge than the guys were on their tundra walk! They came back to the lodge and joined me for a while taking shots of my bears before they went out again. But they didn’t go too far away, as all the action was here at the lodge. Another bear decided to come to say hello and then went to check out the group. This was their first up close encounter with a bear outside the compound and I was able to record it. A little over excited the group spread out a little too much, so Nolan went out to advise them to stay closer together as a group. We had a really good group and they were excellent at following our guide’s advice.

As I watched from the lodge compound and Alan from outside with the group, the two male bears greeted each other and then started to play fight! As they went out of my sight I rushed up to the upper deck so I could get a better view of them.

The light was fading so the group came back into the compound and very happy we got ready for dinner. Each evening before dinner hors d’oeuvres were severed either in our lounge or the other lounge, as a  complete group it gave us an opportunity to review the day’s activities together and for the guides and Nolan to give us briefings about the next day’s activities. Then across to the dining room for dinner where we chatted some more!

After our early start and exciting day we were all tired so there was no guide presentation on our first night and we were tucked up in bed by 9pm. I just could not get the grin off my face and the last thing I can remember before falling asleep was how I was still smiling! 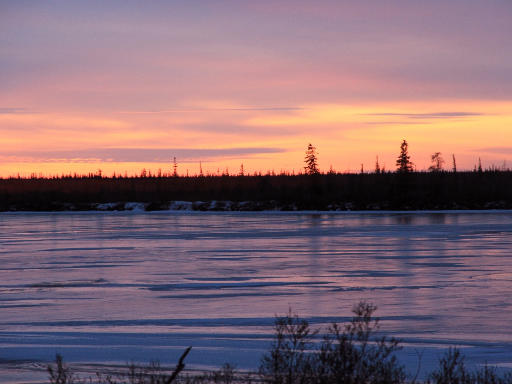 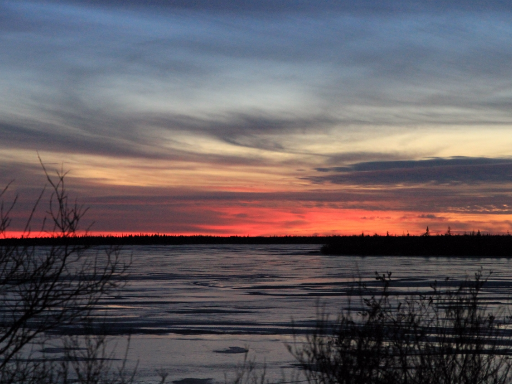 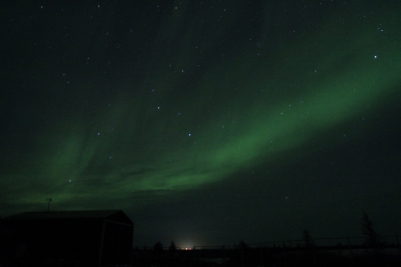 Next thing I knew, at around 3am, there was a knock on the door, “northern lights!”… Out of bed (we had left clothes out ready just in case) we were dressed and outside pretty quick. It wasn’t the best of shows, but considering I wasn’t expecting to see them at all (cloudy forecasts) I was happy to see them! We oohed and arred at them, took pictures and went back to our room. We were wide awake so Alan and I stayed up watching the display, looking through our bear photos and videos until it was time to get up.