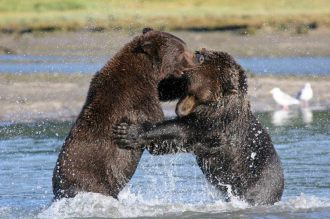 Although there is no guarantee you will see bears on an organised bear viewing trip, with local knowledge and experience it's obvious these will give you a higher chance of finding a bear. Of course not all bear searching and viewing has to be done under experienced supervision, you can find your own bears. We call these 'chance' bear viewings... 'chance' because they are just that, there's a chance you might see one! But with a bit of pre-planning you can greatly increase those chances.

Once you have 'found' that bear...

Unplanned chance encounters where you find yourself too close to the bear (for example on a trail)...

If the last two points above make you nervous about hiking in bear country, consider going on group hikes. If this is not possible, talk while you walk, especially through areas with lots of trees or long grass. Bears have good hearing, so give them warning you are approaching, if they know you are coming they will likely move off the trail to avoid you.

The largest concentration of bear numbers we have ever experienced was in Katmai National Park, near Brooks Falls. These were brown (grizzly) bears, at the very moment we were being given our bear awareness training a large bear walked right by the door of the hut, they came right up to our cabin grazing on the grass, the two of us walked to and from the viewing platforms on our own (talking as we walked) but I can honestly say we never felt afraid of the bears. Even when Alan experienced a bear slowly walking up to him while he was reading on our porch, other than being surprised, he never felt threatened. So don't let it worry you, there have only been 25 fatal bear attacks in North America in the last ten years, most of those were people camping or caused by getting too close to the bear in an attempt to get a better photo... just don't risk it!

For comprehensive bear safety advice visit the US National Park Service (NPS) through the link below.