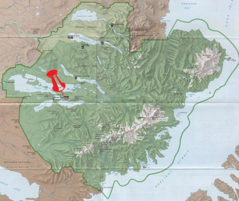 In mid-September 2008, as part of our Alaska trip, we visited Katmai National Park twice. The second visit was to the world famous Brook Falls.

Katmai National Park & Preserve is located on the Alaska Peninsula, across the Shelikof Strait from Kodiak Island. There is no road access to the Park and the lodges can only be reached via small float plane or boat. Our accommodation for our second visit was Brooks Lodge, located within Katmai National Park.

Our adventure started with a flight from Anchorage to King Salmon - Flight 11 - Pen Air. We were met at King Salmon by a Katmailand representative and transferred by bus to the Katmai Air float plane. Flight 12 - King Salmon to Brooks Lodge - a 20 minute smooth flight. We arrived at Brooks Camp at 12:30 and we were immediately taken for our ‘bear orientation’ presentation by the Park Service (the presentation covered bear awareness and park rules). We checked in just before 13:00 and we were shown to our cabin for the next three nights. We were lucky enough to have one of the best cabins at Brooks. Cabin 27 was 1 of 3 cabins with clear views of the Brooks River Oxbow and bears! From our porch we were able to see 8 bears!

Each cabin can sleep up to four people in two sets of bunk beds.  You have a sink, shower and toilet (the toilet is located in a boarded off area however the shower and sink is separated from the sleeping area by only a curtain).  For this reason I would not like to share a cabin with people I didn't know.  We had reserved the cabin for the two of us, however, if you come as part of a tour group you may end up sharing (check the small print!)

All the bears featured in the video below were filmed from our cabin porch. 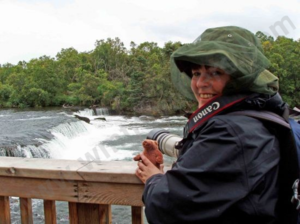 We walked to the famous falls, where we spent sometime watching a lone bear fishing. We were surprised at how small the Falls Platform was, however, it wasn’t too busy and there was plenty of room for all that wanted to be on it.

At 17:00 we strolled back towards the lodge to find that the bridge across Brooks River, back to the lodge, had been closed due to the close proximity of the bears. We went up onto the Lower River Platform and looked down to see a young bear sat by the gate to the bridge!

The flow of bears was almost continuous and at one time we counted 25 bears in view from the platform. The bridge finally opened at 18:00 and we returned our stuff to the cabin before going for dinner.

After dinner, we watched the bears from our cabin. At one point we heard what we thought was a fisherman walking in the water near by, Alan sneezed and the walking stopped, which made us think ‘bear’. Within, 30 seconds a bear appeared 15 yards from our cabin! It walked into camp and we heard calls of 'bear in camp'…

We got up the next morning at 06:30 for breakfast at 07:00. We sat at our cabin until the lighting got better and were rewarded with seeing a sow and her two cubs walk by the side of our cabin from within the camp and out towards the river.

We went for a walk to Brooks Lake and then back to the Falls Platform to find three bears at the falls. One of them really didn’t like the others and kept giving them warning looks! One of the bears had the cutest face, I took lots of pictures of him (the one with scars on his nose).

We enjoyed watching the bears for about two hours almost on our own before lots of late arrivals joined us, so we gave up our spots to new comers and went down to Riffles Platform for a while before returning to the cabin and sat in the sun for the rest of the afternoon.

After dinner we went back to the cabin as I had developed a headache from sitting in the sun too long! I took a tablet and went to bed, while Alan sat on the porch reading a book. It wasn’t long before I heard him jump and say hello to a Magpie that had been somewhat surprised by Alan. The magpies then jumped around on the roof of our cabin for a while before it became all quiet again. Suddenly I heard an almighty bang from the porch and the wooden bench had been pushed back to knock against the wall of the cabin, I then heard Alan calling out ‘whoa bear!’ I half expected to hear screaming next… but he burst in through the door going ‘b… b… b… bear’ and pointing out the door, and there was the bear happily eating grass right outside our cabin not showing any interest in us at all.

Alan’s version of the event… ‘I was reading my book, with my mind firmly in California with the murderer surrounded by the FBI planning his escape, when I caught sight of something brown out the corner of my eye, I looked up to see a bear 8 feet from me looking me straight in the eye!’

...Of course he followed his bear awareness training, squealed like a prey animal and rain through the door!!! Fortunately, the bear knew Alan was there and just wanted to eat some grass before slowly moving on! After this Alan decided it was too cold to read outside and he came in…

After a bear-dream filled night we got up at 08:00 and had our bags packed for the 09:00 check-out. We decided not to go across the bridge in case we got stuck, we heard that some unfortunate people the previous night had been stuck over there from 18:00 until 20:30 missing dinner! We watched the bears from our cabin porch again until 11:30 when we had an early lunch before our 13:00 flight - Flight 13 Brooks Lake to Nonvianuk Lake by Katmai Air float plane and then Flight 14 a gravel runway from near Kulik Lodge to Anchorage Airport, Katmai Air. Both these flights were a bit too bumpy for me! We arrived back in Anchorage at 16:30 and Katmai Air transferred us to our hotel near the airport.

We arranged our visit to Brook Falls through the following website: www.katmailand.com

To read about the natural history of Katmai National Park visit the park website at: http://www.nps.gov/katm

Time Viewing:        Some restrictions in July otherwise all day