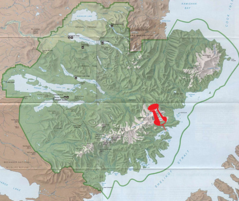 In late August 2008, as part of our Alaska trip, we visited Katmai National Park twice. The first visit was to the coast.

Katmai National Park & Preserve is located on the Alaska Peninsula, across the Shelikof Strait from Kodiak Island. There is no road access to the Park and the lodges can only be reached via small float plane or boat. Our accommodation for our first visit was Katmai Wilderness Lodge, a privately run lodge located within Katmai National Park in Kukak Bay.

Our adventure started with a flight from Anchorage to Kodiak. We checked in to the Kodiak Inn before lunch that day. The choice of hotels in Kodiak is somewhat limited, the Kodiak Inn being one of the better ones, was very worn and smelt of fish!  It was a beautiful sunny day so we spent the afternoon in the docks area watching the seals, visiting the Wildlife Refuge Centre (us, not the seals) and the Kodiak Brewery.

The next morning we were ready for our pick-up at 9am, we looked out the window and saw rain and windy conditions… it wasn’t looking good for a float plane ride! We called Andrews Airways to be told that the conditions were indeed too poor to fly. The flight was delayed until the conditions improved; unfortunately that wasn’t that day and we had to check-in again for another night at the Kodiak Inn.

Warning: the weather is very changeable even in the ‘summer’ and it is not unusual for flights in and around the region to be delayed or cancelled. The terms of the booking for the Katmai Wilderness Lodge are that you do not get a refund for any days or part days that you miss due to the weather. It sucks, but we knew this when we booked it. We recommend taking out insurance to cover the days you may lose.

We got up early the next morning hopeful that the conditions would have improved, they were certainly better but it was still dull and raining. The flight was delayed again and we had to wait until 1pm for the final decision on whether we would make it out to Katmai. One o’clock came and we had resigned ourselves to spending another night in the Kodiak Inn, when I heard our names being called in the reception area. Andrews Airways had arrived to pick us up, we had 10 minutes to get ready, grab our bags and check-out. We were so excited about actually getting to go that we made it happen in that ten minutes! 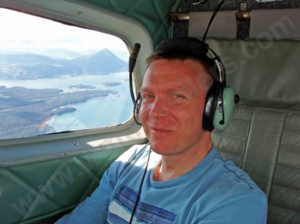 Alan on our Andrews Airways Flight

Before we knew it we were on Flight 8 on our way to Katmai National Park. The flight was quite exciting as we had to fly really low to keep out of the cloud. We were able to see whales and even sea otters as we flew over them! Our pilot was Willy Fulton, the pilot that used to fly Timothy Treadwell in and out from Katmai (and also found his and his girlfriend’s bodies after they got closer than any person would want to get to a bear!!) An excellent pilot, it was a flight I actually managed to enjoy.

We finally checked-in to our home for the next two nights, Katmai Wilderness Lodge. The accommodation was much nicer than we were expecting, it was comfortable and homely.

We had soup in the main lodge and then headed out for a boot fitting before putting on our waterproofs and going out on a boat. The small boat could seat 9 at a squeeze, we went out with 3 others so we had plenty of space. The seating area was inside with glass windows all round and drinks and snacks available for us to help ourselves. The boat even had a toilet.

On our first trip out we saw Puffins, Bald Eagles, Harbour Seals and 7 Bears. The ride was a bit rocky so we didn’t manage to get any decent photos on this trp out.

Dinner was good, fish and beef with salad and vegetables, in a help yourself kind of atmosphere. There were 8 guests including us during our stay, the lodge takes 12 people in total. 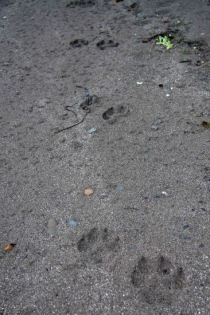 The next day was a late start, the hosts don’t believe in early starts… we got up at 06:45 and went for breakfast at 07:45. The Chef prepares the breakfasts to order, so we were able to have a really nice cooked meal before we went out to see the bears.

Again we donned our waterproofs and boots and headed out onto the beach in front of the lodge to board the boat and found wolf tracks in the sand! 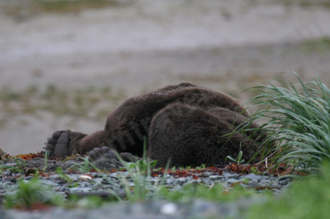 We went out in the boat to a river mouth on Kukak Bay and exited the boat onto the land, as we came around a bend we came across a sleeping bear and had to wait around 30 minutes for the bear to wake up and move before we could make our way down onto the tidal flats.

We set up our tripods and cameras and waited for the bears to come closer to us to fish. It wasn’t long before our sleeping bear and two others made their way to the mouth of the river walking within 12 yards of us, not paying us any attention at all.

We watched them fish and fight before a storm started to come in and they and us moved away from the coast into the grasses. We spent an hour sitting in the rain… not one of my favourite moments from the trip, I could hardly see the bears over the grass and my waterproofs weren’t feeling quite so waterproof with all my gear rubbing against it! The weather got even worse and finally we were allowed to return to the boats and had a bumpy ride back to the lodge for lunch.

I changed into some dry clothes and we stayed in our warm cosy cabin all afternoon reading and watching the seals bobbing around in the bay. We took advantage of the weather and went through our photos and video while we listened to the wind and rain hitting our cabin roof.

At 18:00 we headed to the main lodge ready for dinner and chatted with the other guests. Dinner was Salmon and Ribs and we continued to chat until 21:30 when we headed back to our cabin for an early night. 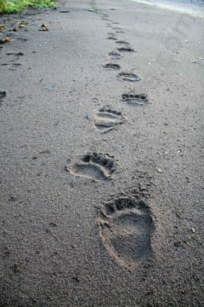 Bear tracks in the sand

The next morning we were up at 06:15 and ready for breakfast at 07:20. The weather couldn’t have been more different from the day before and it was gloriously sunny. We could finally see the mountains around the lodge including the view of Hallo Glacier. Our bags had to be packed and ready outside our rooms for 07:30. The lodge manager wanted us all out of our rooms as soon as possible so the rooms could be cleaned by our guides before they took us out. We strolled down to the beach and found bear tracks running in front of the lodge!

We walked to the boats at 08:30 with our bags so we could meet the float planes later on in the day. We went out to the same location as the day before and watched the bears fighting and fishing, this time in the sunshine. There was a professional photograph there too with his little boat he was spending several weeks in Katmai National Park on the coast photographing the bears, he was very brave (or stupid) to be out there on his own!

We stayed with the bears until midday when we headed to our rendezvous point to meet the float planes and had a picnic while we waited for them to arrive.

Flight 9 Andrews Airways to Kodiak - flight was good and we were transferred back to the Kodiak Inn for our last night on Kodiak Island.

We arranged our visit to Katmai Wilderness Lodge directly with the managers of the lodge, here is a link to their website: www.katmai-wilderness.com

To read about the natural history of Katmai National Park visit the park website at: www.nps.gov/katm