In June 2014, we travelled from Seattle to Haines (Alaska) including a week on Vancouver Island. We spent two of those nights in Telegraph Cove and did a grizzly bear viewing tour with Tide Rip.

Located on the north eastern coast of Vancouver Island, Telegraph Cove is an old sawmill and cannery community now tailoring to tourists that wish to sail, fish and view wildlife.

The Cove is home to Tide Rip Tours and Stubbs Island Whale Watching. So at the right time of year a bear viewing trip can be combined with a whale watching trip. 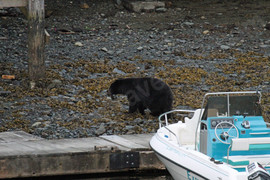 Telegraph Cove has its own wildlife viewing opportunities with black bears and river otters regular visitors to the docks. On our first night we had a close encounter with a black bear a short walk from the docks!

Tide Rip is owned, managed and operated by a local family and has been running tours for many years. 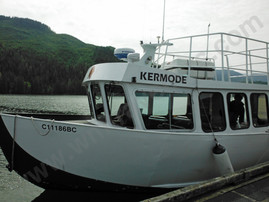 Tide Rip's grizzly bear tour involves a two hour boat ride into Knight Inlet to Glendale Cove the same location as Knight Inlet Lodge. Viewing, however, is only carried out via boat, not platforms. Not a problem, as long as you pick the right time of year for a visit. The ride out to Knight Inlet is via a 12 passenger aluminium water taxi with a toilet. 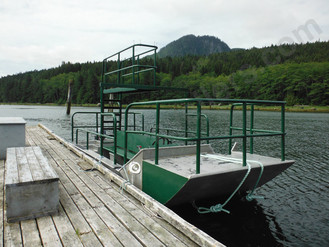 Once in Glendale Cove you are transferred via a float to a skiff. The flat bottom viewing skiff is a modified herring fishing boat, allowing wildlife viewing in the shallow estuaries.

Our experience started with seeing our first bear of the day even before we left the cove! At 6:45am we checked in for trip at the Tide Rip office and then made our way down to the Kermode. At 7:00am we left Telegraph Cove and started the two hour ride towards and through Knight Inlet. Along the way we saw Pacific white-sided dolphins and Dalls Porpoises.

Two hours later we arrived at the float where we docked. The float is owned and used exclusively by Tide Rip.

June is an excellent time of year for viewing the grizzly bears as the berries have not yet ripened and the salmon aren't running, the bears' diet tends to be sedge grass and shellfish which brings them out of the tree line perfect for viewing from boats.

Once at the float dock we transferred to the skiff. We were pleasantly surprised by the amount of space on the skiff, plenty of room for the size of our party, we were all able to spread-out and get our shots without getting in the way of one another.

As we had pulled up to the dock we had already seen five grizzly bears, two young bears 2-3 years old and a mother bear with her two yearling cubs. We stopped the skiff briefly to see the momma and her cubs and then headed up to the estuary before the tide turned. The water levels are much lower the further the cycle is from a full moon, so we were unable to get up the river as we had done in late September in 2006.

As we got up to the main sedge grasses we saw a large male stand up on his back legs to check us out before running away into the woods. The males are very wary of humans and are generally not comfortable around the boats (unless they are distracted by mating), the females, however, use this to their advantage and are quite happy to get closer as they use us for protection from the aggressive big boys.

Another two bears were seen in the distance moving away (thought to be a mating pair) and then we spotted a deer with her fawn. The water levels were starting to drop, so we floated down the estuary back to the mother bear and her two cubs and then to a young male bear approximately 5 years old. The mother was reasonably comfortable with him being around, although she did keep a close eye on him, Lindsey, our guide, thought he was likely one of her previous cubs. 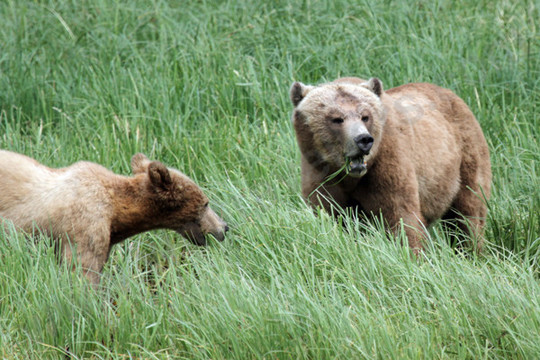 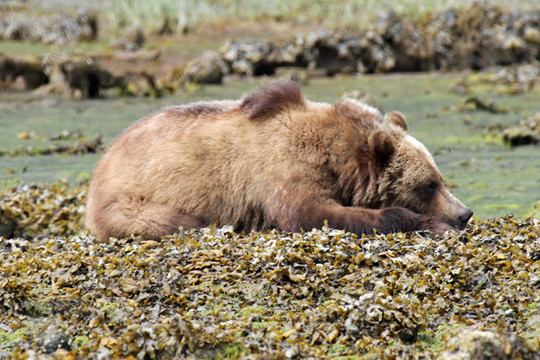 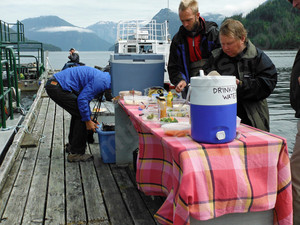 Lunch on the float Knight Inlet

The two younger bears had moved away so Lindsey decided we should have an early lunch. We returned to the floating dock and ate a really nice picnic while we watched the 5-year-old bear across from us. The lunch was cold meats and salad, set up on a table so we could make our own wraps and buns. We had a leisurely meal chatting with the other guests for about an hour.

At 1pm we helped pack up the picnic stuff and headed back out on the skiff to view the mother and cubs again, another bear had appeared in the distance but the tide had dropped so we couldn't get up to view it. Lindsey decided we should check around the corner to see if the two younger bears had come back and we were pleased to see they had. We spent about 30 minutes following them as they walked along the coast, stopping for grass and shellfish along the way. They were really comfortable with us watching them so Lindsey took us closer and closer until they were just in front of us.

We left them to return to the momma bear and Lindsey did the same with her. She attempted to go to sleep on the seaweed, but her two cubs wanted feeding so they moaned at her until she gave in and she lay flat on her back and let them feed right in front of us! She fed them for 5 minutes and then rolled over for a sleep, one of the cubs lay by the side of her, while the other snacked on some sea greens. 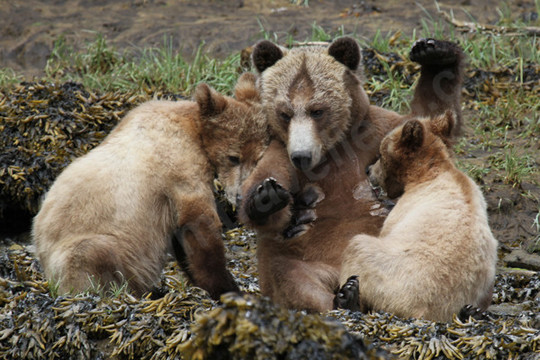 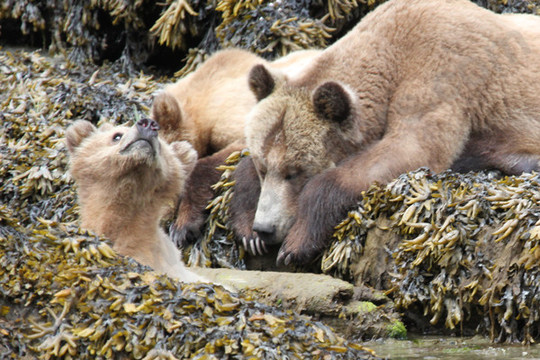 We’d had such a great viewing experience with the grizzlies we all agreed to leave slightly early so we could look for black bears on our way back. Lindsey spotted the first and I spotted the second. 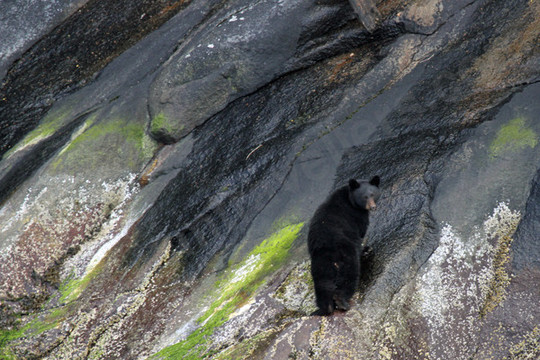 We arrived back in Telegraph Cove at 4:45pm.

You can read more about our Vancouver Island trip and see video and more pictures from this tour in our trip report.