The Kanha National Park was originally a part of the Gondwanas or the "land of the Gonds". The forest of the Kanha Tiger Reserve was inhibited by two indigenous tribes of Central India, the Gonds and the Baigas. The vicinity of the reserve is still occupied by the villagers of these tribes.

Located in Mandla and Balaghat districts, the Kanha Tiger Reserve is being occupied by two major sanctuaries, the Hallon and the Banjar Sanctuaries. Respectively covering the area of 250 sq km and 300 sq km, the Kanha Reserve together forms a greater area of 1,949 sq km. 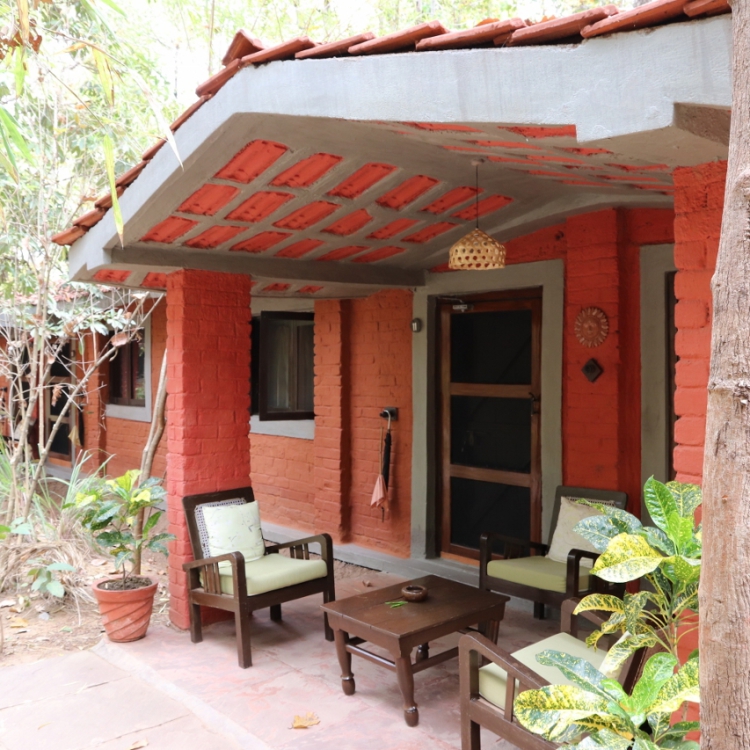 We had room 11, hot water supply only at set times of the day. Hairdryer, plenty of well-placed sockets. Shock horror no WiFi. 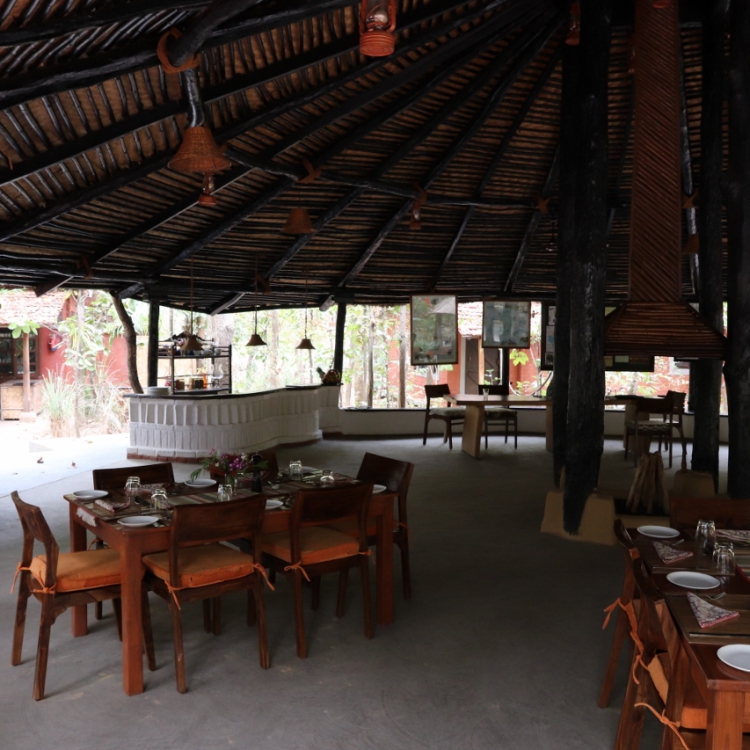 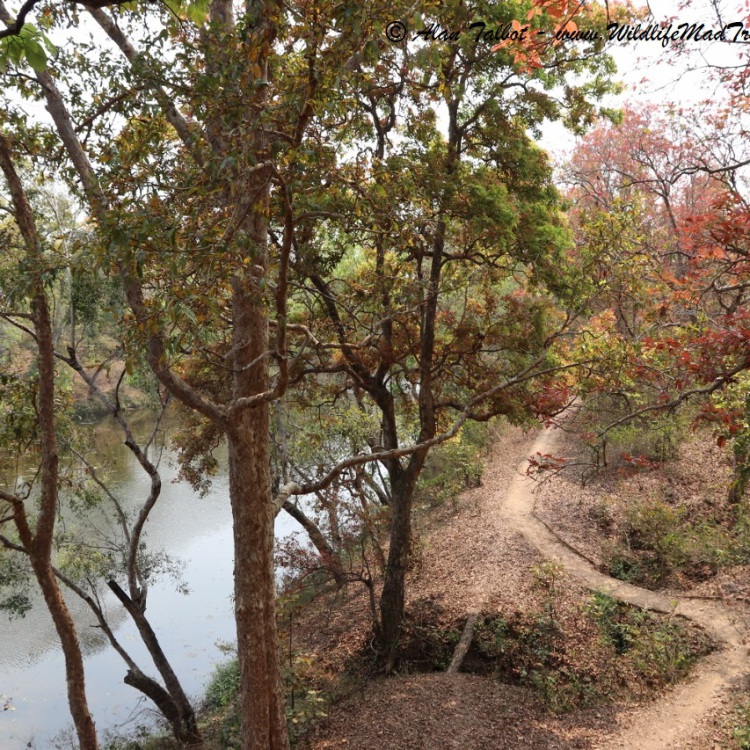 Buildings in a ‘jungle’ setting with a trail to a really nice river walk with interpretive displays. 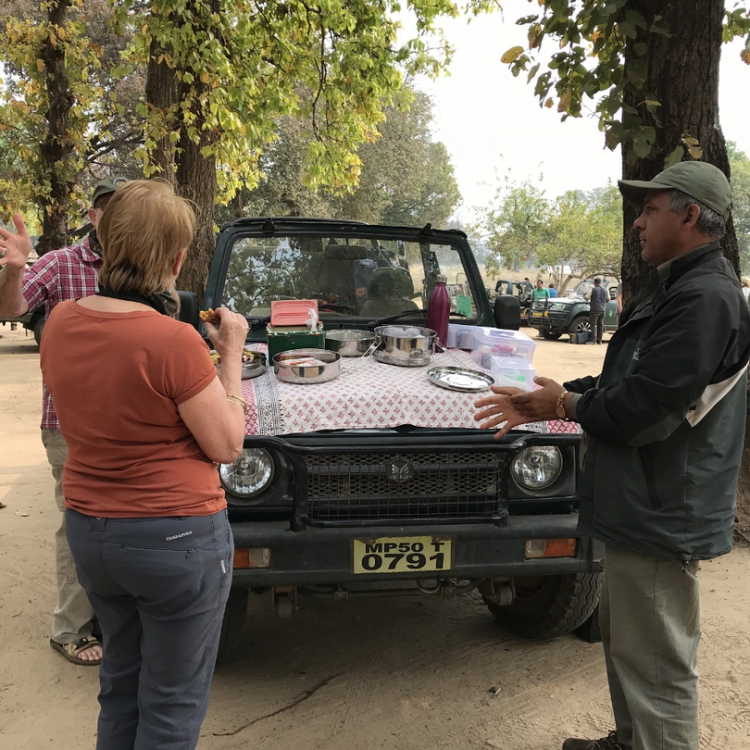 Vehicles standard bench style seats. Lodge had two naturalist/drivers available for us, they were both OK. 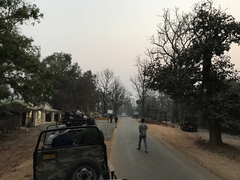 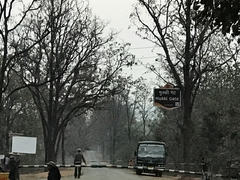 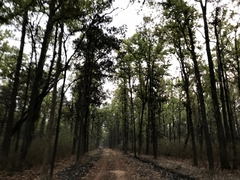 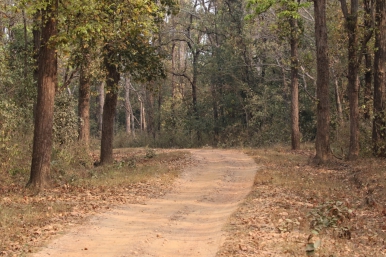 Alan was sick during the night so he decided to skip the first drive in Kanha.

The park was different to how I had remembered it, but I worked out later that was because we were entering through a different gate and exploring a different part of the park. For the morning drive we were exploring the Mukki area of the park. Which has lots of forest and bamboo making it difficult to see too far into the ‘jungle’.

Most of the wildlife I saw was crossing the road, muntjac deer, langurs, red jungle fowl, spotted deer and gaur.

Our naturalist/driver needed a comfort break so we stopped at one of the restroom spots, just as we were getting out the vehicle a park ranger on a motorbike stopped to tell us, rather excitedly, he had just seen a tiger next to the road. We headed off towards the location and found two other vehicles, one from our group. They told us a tiger had come out and was at the edge of the road when a motorbike came along and frightened it back into the forest!

They moved on and just as they drove off we saw the tiger cross the road further up the road in the opposite direction. We drove towards it and I got my camera out ready to take a photo and as we pulled up I could see the tiger moving through the bamboo. Just as I got the camera to my face our naturalist/driver drove forward and I missed the shot! By the time we got the message through to him we had seen the tiger, it was too late and it was gone. To say he was apologetic was an understatement, throughout the rest of the drive he kept trying to explain he couldn’t see the tiger from where he was. No photo, but I had sighted tiger number 13 of the trip. 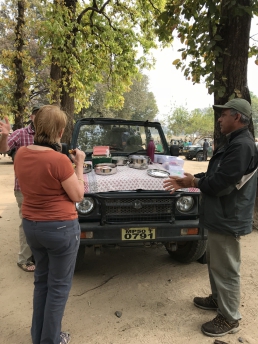 We went for our packed lunch (this lodge did the best packed lunches with really yummy homemade Indian snacks). The main picnic sites in Kanha are really good (in comparison to other parks) they had flushing toilets and plenty of space for the vehicles to spread out under the shade of the trees.

Refuelled it was time to do more exploring and we stopped for the yellow-footed green pigeon and a green bee-eater, “oh look there’s a bee”.

We also stopped for sloth bear scat and tiger scat. I’ve saved you from seeing images of sloth bear poop (it was surprisingly chunky and solid compared to North American bear scat), I thought the image of the tiger scat was more interesting as you can see the scrape marks where the tiger kicked back some dust onto it.

When I got back to the lodge I found Alan had done some washing (bless him) and was starting to feel a bit better, so we decided to do a short walk to the river to test out how he got on. It was nice to be able to walk for once!

It was getting hot so we returned to the lodge so Alan could get some fluids back in him. He didn’t eat lunch but he did have a banana lassi which gave him enough energy to join us on the afternoon drive. 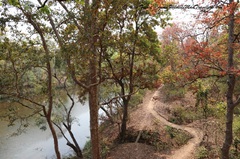 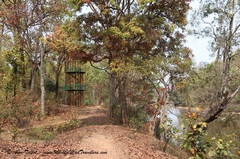 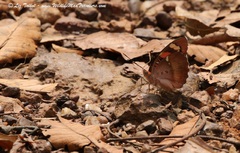 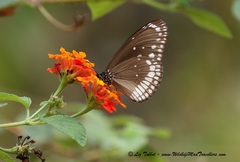 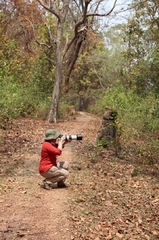 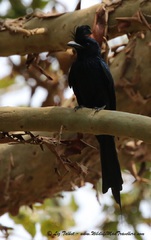 We drove a similar route around the Mukki area that we did in the morning, giving Alan a chance to see what this area of Kanha was like. We stopped for common kingfisher, cormorants, grey-headed fish-eagle, swamp deer, peafowl and wild boar. Our guide also spotted a jungle owlet, which flew off before we stopped to photograph it. Alan misheard what he said and was looking for what he meant by a ‘jungle omelette’, was he referring to a jungle fowl? No Alan, a jungle owlet!! From then onwards all jungle owlets were jungle omelettes! 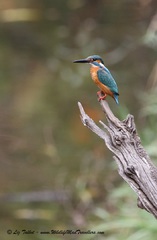 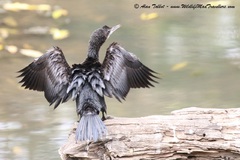 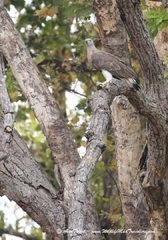 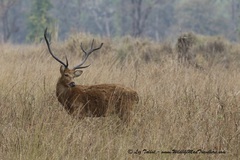 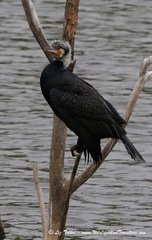 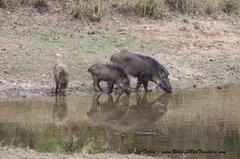 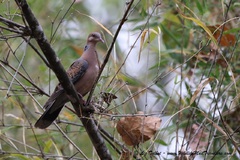 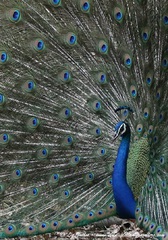 We were heading back towards the exit as the light was starting to fade when we saw an animal slink across the trail... “it’s a leopard!” Leopards are incredibly shy and we expected it to do the usual disappearing act and melt into the forest foliage. Imagine our surprise when we stopped near to where he crossed the road for his royal spottiness to be doing a ‘squirrel’ looking right back at us! We tried to keep as still as we could so as not to spook him, but he wasn’t sticking around, up onto his feet again he was gone without so much of a glancing look back! 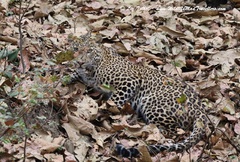 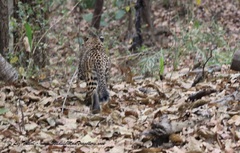 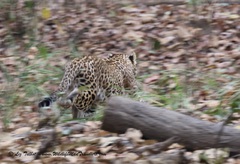 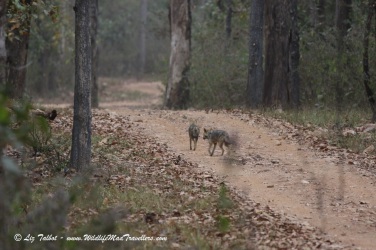 Jackal... not the wild dogs!

Onwards to the park exit and the light was fading fast, just before the exit a pack of wild dogs ran across the road and one of them chased a fawn through the forest alongside us. Too dark and too quick, we just enjoyed watching the chase unfold.

When we got back to the lodge another of our vehicles had seen possibly our leopard after us, it had taken down a spotted deer fawn. They reversed back up the road towards the leopard and spooked it off its kill. They heard warning calls ahead of them and a tiger came out of the grassland, walked towards the leopard’s kill and picked it up!

Continue to next page for Day 10