Chriss, Robert and Rosanne met us for breakfast and we said our goodbyes as they were spending another day in Winnipeg. We had already checked in for our flight and dropped our bags before breakfast, so we had only to collect our hand luggage from or room, check-out and go through security.

We flew on to Toronto to start another short adventure commencing with a taxi ride to our hotel for the next two nights. We found ourselves in the Loose Moose Tap & Grill for dinner, lots of beer choices and massive portions!

After dinner we took a stroll around the vicinity of our hotel.

We started our day with breakfast at Over Easy (Yonge Street), strolled around Toronto and then onto a ferry from Jack Layton Ferry Terminal to Ward’s Island. It was lovely and quiet on the island and the late Fall had left some pretty colour still on some of the trees.

We decided to have breakfast in the hotel looking out over the baseball pitch and a nice restful morning in the hotel catching up with the world and getting our bags ready for our flight home.

We were once again to travel in business class this allowed us to check-in early and enjoy the business class lounge where they were serving a buffet dinner before the flight. We decided to eat now rather than on the plane, the buffet was quite nice, with plenty of choice.

As soon as the flight had taken off we turned our seats into flat beds and tried to get some sleep on the short six hour flight to London. 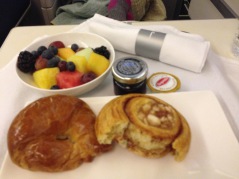 I was awake as the cabin crew got breakfast ready and I woke Alan up so he could get something to eat before we landed. Priority baggage only makes you quicker when it arrives quickly, sadly no-one’s luggage, including the crews, arrived quickly! When it did arrive we ours was one of the first through and then another delay while we waited for the transfer bus to the long stay car park. Sometimes timings work out perfect, sometimes they don’t. Fortunately, our drive home went better!

Looking back over the trip it was well worth the money, walking with polar bears was an amazing experience!